Sniffers to Snuff Out Pests

Many homes and businesses deal with termite problems but a place you don’t often see the pest inspectors is around power poles.

Sparky the kelpie and Buzz the black labrador paid a visit to Dubbo yesterday as part of an Australian-first trial to use sniffer dogs in order to detect termites in power poles.

Country Energy’s North Western regional general manager Peter Halliwell said the trial will take place in the Bourke and Nyngan region and will incorporate using the dogs to detect termites in 2000 poles.

“We are always trying to find better ways of maintaining our network,” he said.

“The network in these areas has always been very susceptible to termites, due to the soil type and the (dry) environment surrounding the network

“It is an ongoing issue and many poles have to be replaced.

“The dogs will be able to detect for termites earlier than our routine testing would, as we won’t have to drill into the pole.

Mr Halliwell said once termites had been detected they would be able to replace the existing pole with a steel pole.

“So it will be a safe and more reliable network,” he said.

Martin Dominick of Australian Canine  Services Pty Ltd T/A The K9 Centre  based in Queensland trained the dogs and said he was confident in their ability to effectively detect for problem termites.

“These dogs are required to be in training for a minimum of three months and there is a certain level they must reach before they are approved,” he said.

“The first part of the trial will focus on termite detection, the next step will be to train the dogs to detect rot in the poles.”

Mr Dominick said the dogs can smell deep inside the pole and are rewarded once they indicate that they have picked up the smell by scratching at the base of the pole.

The dogs were introduced to asset inspectors Mark Beetson of Nyngan and Joe Stephens of Bourke who will be working with the dogs in their areas over the trial period.

They will spend three days completing extensive training with the dogs and trainer Mr Dominick.

“This is a trial so we are testing our assumptions; I am sure we will learn a lot during the process and help improve power pole inspection methods for the future,” Mr Dominick said. 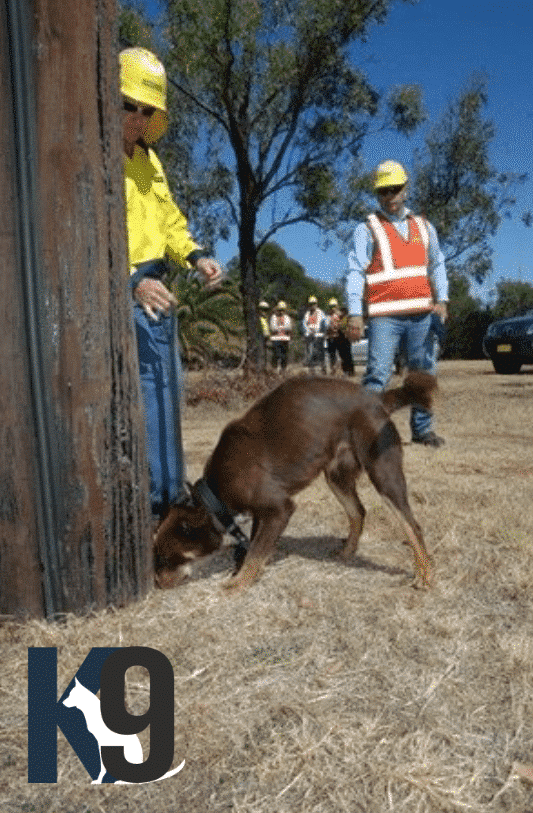 If unanswered, Please leave a message and a Trainer will return call